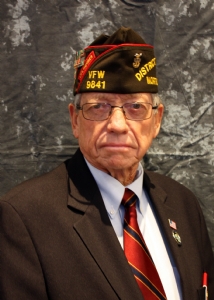 Robert Brock joined the Navy in 1963 and retired as a Master Chief Petty Officer (E-9) Operation Specialist, Surface Warfare.  He did four tours in Vietnam and is active in the the following Veterans groups:  Past Commander Fleet Reserve Branch 301, Greenville, NC; Current Vice Commander American Legion Post 151, Farmville, NC; Member of Masonic Lodge 517, Farmville, NC and is a Shriner.
He is a Life Member of Post 9841 and serves as the Quartermaster/Adjutant.

Robert and his wife Linda have been married 51 years have two children and four grandchildren.