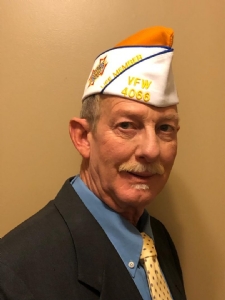 Tim served in the 81st Tactical Fighter Wing of the Air Force from 1968-1972 at RAF Woodbridge and RAF Bentwaters, England.  Years later he enlisted in the 145th Airlift Wing of the NC Air National Guard in Charlotte from 1986-2005.  During this time he was deployed to support both Enduring Freedom and Desert Shield/Desert Storm.  He retired from the NC Department of Transportation in 2009 as Bridge Maintenance Supervisor.  Tim is a lifetime member of the George Loris Dover VFW Post 4066 in Shelby, NC.  While serving as past post commander, the post obtained the distinction of All-State/All-American.  He has also served VFW District 14 as Junior Vice Commander and Senior Vice Commander.  Tim is married to Anne Southard has one child and two grandchildren and resides in Shelby, NC