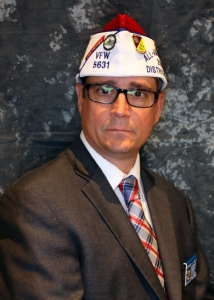 Richard Van Holly served in the United States Navy from 1986-1991.  After completing boot camp, Van attended Submarine School in Groton, Ct.  Upon graduation he was assigned to the USS Tecumseh SSBN628 (B).  During his time on board the USS Tecumseh he assisted within the medical division.  After a year of rigorous training, Van was designated as "Qualified in Submarines".  He completed 3 ballistic submarine deterrent patrols while assigned to the USS Tecumseh.  Van then attended Hospital Corpsman school and was reassigned to the Naval Hospital in San Diego, CA where he attended to the needs of active duty and retired personnel.  Van is a life member of the Stanley McLeod VFW Post 5631 where he served as quartermaster, house committee member and District 9 Senior Vice Commander.  Van is married to Alicia Holly, has 3 daughters and resides in Broadway, NC.

The Department Headquarters is open Monday through Friday from 9:00 am to 5:00 pm with the exception of Holidays and some official VFW events.